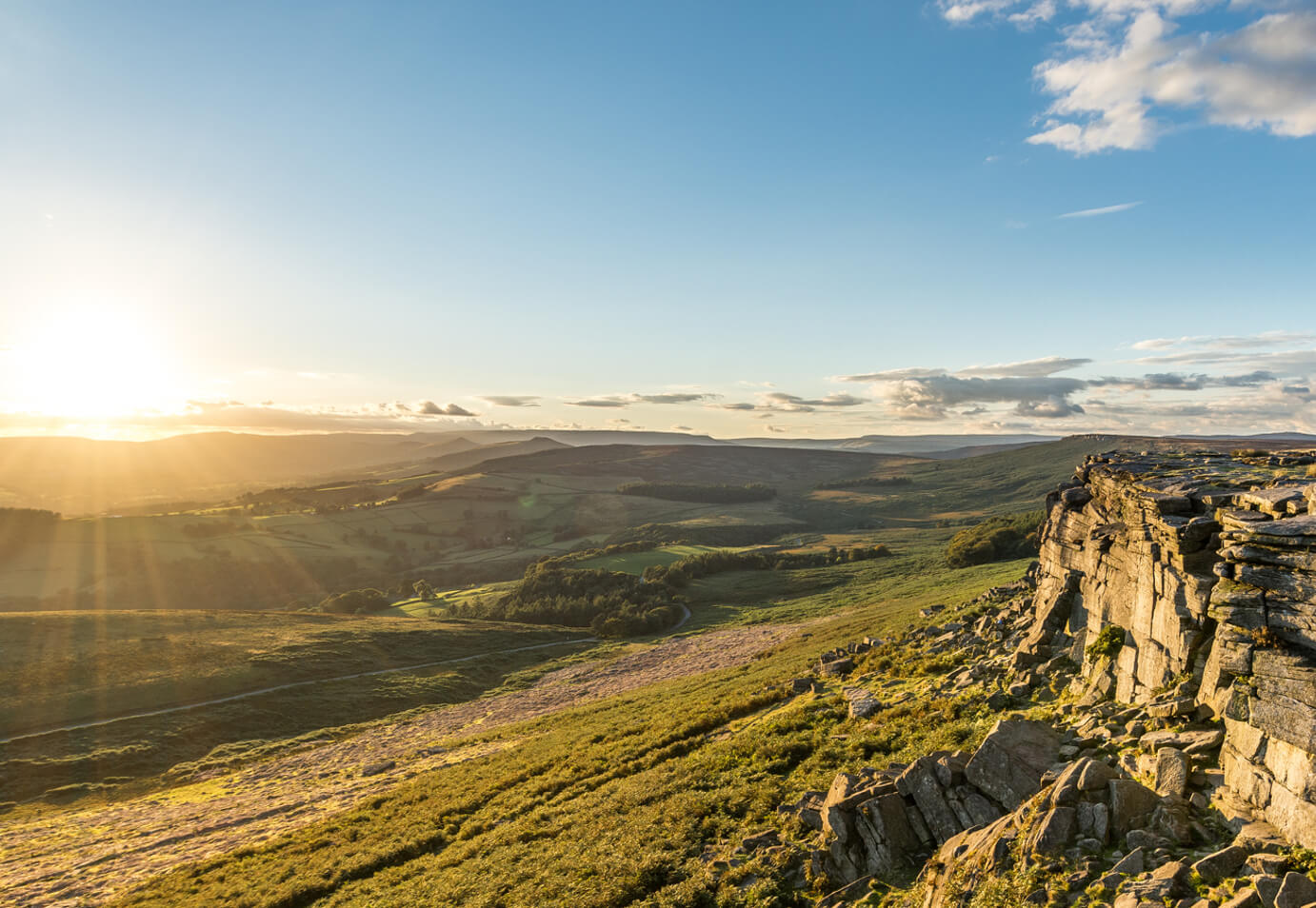 The Peak District offers an unforgettably scenic experience for all of its visitors, making it the perfect backdrop for a variety of TV and film genres.

From its wild moors and rugged fells to the stately grandeur of its unrivalled array of historic houses, the Peak District is a truly inspirational British landscape. With so many unique and beautiful locations on offer, it is little wonder that so many films and TV programmes have chosen the Peaks as a shooting location over the years.

Read on to discover our compilation of 8 locations used for filming in the Peak District…. 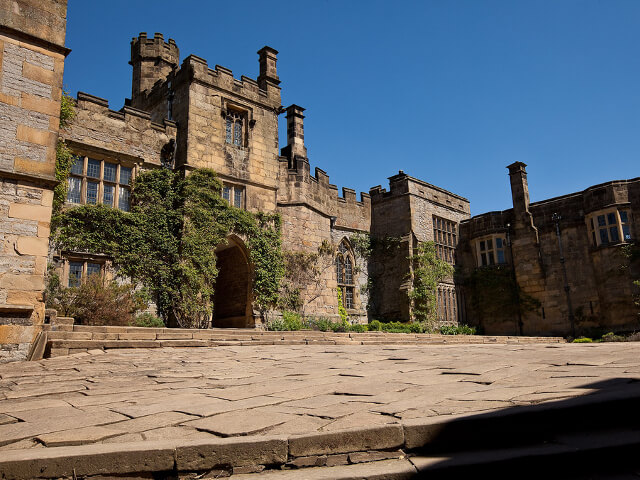 This magnificent medieval manor house has stood watch over the banks of the River Wye since the 12th century, and has been the seat of the Manners family for nearly four centuries. One of the UK’s finest surviving examples of a manor from the Middle Ages, directors from around the globe are regularly drawn to this exquisite masterpiece.

In 2017 the hall featured in the BBC drama Gunpowder, as the home of Kit Harington’s vengeful character, Robert Catesby. The house has also been portrayed as Thornfield Hall in three onscreen adaptions of Charlotte Brontë’s novel, Jane Eyre, including the popular 2011 adaption starring Mia Wasikowska.

Haddon also had cameo appearances in well-known period films The Princess Bride, Pride & Prejudice, The Other Boleyn Girl and Elizabeth. It even debuted in the popular drama series The Inspector Lynley Mysteries.

If you’re seeking a characterful cottage for your English escape, our catalogue of quirky and unusual holiday cottages offer an abundance of wonders for all tastes. 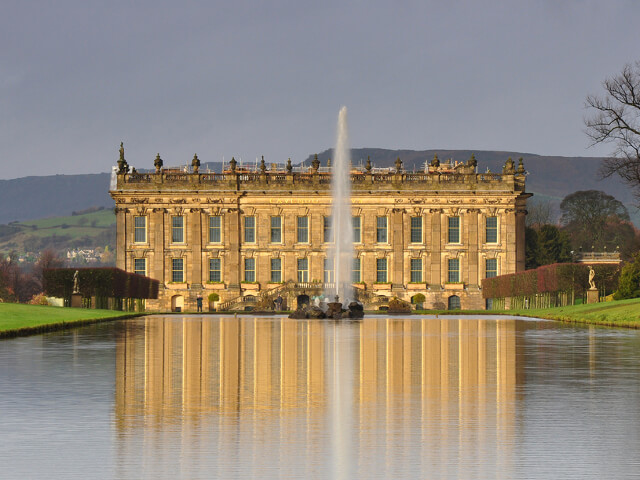 This stunning manor must be one of the most recognisable stately homes in the UK.  In 2005, it soared to cinematic fame as the manorial home of Mr Darcy in film adaption of Pride and Prejudice, starring Keira Knightley. The film boasts scenes in a variety of luxury Peak District locations, meaning you get to see the very best of the architecture and landscape the region has to offer.

The former home of Mary, Queen of Scots, Chatsworth has proven to be a prominent location for a variety film and TV productions. The manor has appeared in the period film, The Duchess (once again starring Knightley), about the turbulent life of famous 18th century socialite, Lady Georgiana Spencer, who actually called Chatsworth ‘home’.

The house was transformed almost beyond recognition when it appeared as the gloomy, crumbling and ivy-covered mansion of the cursed Talbot family in 2010’s The Wolfman. We’ve dug deeper to uncover some of  the UK’s spookiest locations, making a great stay for those looking for both thrills and scenic surroundings. 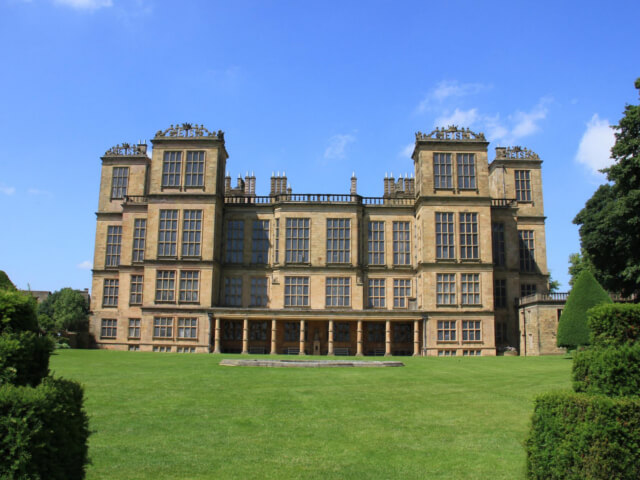 Located near Chesterfield, the superb Elizabethan splendour of Hardwick Hall featured as Malfoy Manor in Harry Potter and the Deathly Hallows Part 1 and Part 2.

The filmmakers fell in love with the look of the building, filming exterior shots here before enhancing its proportions and adding dramatic towers to the roof line using CGI. Measurements of Hardwick’s interiors were also taken so that they could be painstakingly reproduced at the film studios. If you’re a true Potterhead, be sure to take a look at more Harry Potter filming locations.

In addition to it being the backdrop to the magical fantasy of Harry Potter, the hall is also one of the many destinations where Mary, Queen of Scots (2019) was filmed. Used to represent Hampton Court Palace, the house’s long gallery takes centre stage alongside Australian actress and film producer, Margot Robbie. 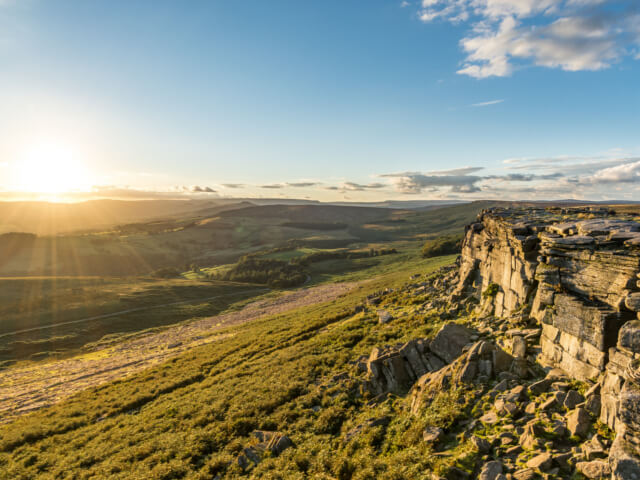 The well-known natural landmark of Stanage Edge, overlooking Hathersage, is a gritstone ridge rising dramatically up out of the Derbyshire moors. Offering magnificent panoramas, it’s undoubtedly provides one of the best views in the Peak District, as well as being famed for its climbing opportunities.

A windswept Elizabeth Bennet (Keira Knightley) took in the wild beauty of her surroundings atop Stanage Edge in a famous scene from the 2005 film, Pride and Prejudice. Surrounded by a wealth of natural settings, this part of the Peaks makes for a wonderful location for a rural retreat.

Making an appearance in arguably the most important part of any film – the opening scene – Stanage Edge stands as a memorable sequence in Jane Eyre, where Jane peers down into the moorlands drearily. Offering evidence of another breath-taking location for the romantic movie, the beautiful surroundings of Stanage Edge make a perfect backdrop for your getaway in Derbyshire. 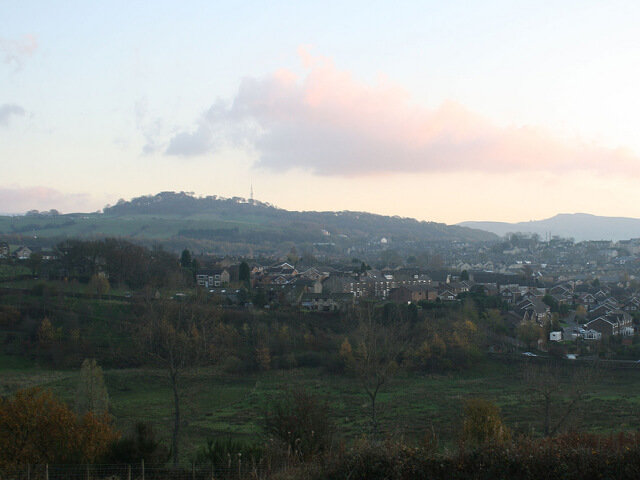 This town, not far from Glossop, became the infamous Royston Vasey in the dark comedy, The League of Gentlemen. The high street’s shops were transformed for the series and fans of the show will instantly recognise the locations of fictional storefronts such as Hilary Briss & Son’s sausage shop and the show’s burger bar.

The series also featured its own film spin-off, The League of Gentlemen’s Apocalypse, in which Hadfield makes an appearance as the characters enter the ‘real world’ via a portal. The series stands as a firm favourite with locals, bringing tourism and fame to the modest town on the outskirts of the Peak District.

Devotees of Royston Vasey will be keen to walk up to to the hill where the local shop stood (sadly, this was only an exterior built during filming), before enjoying a drink in the real-life Masons Arms pub. You can find a selection of pub walks in the Peak District, promising a refreshing beverage at the end of the route. 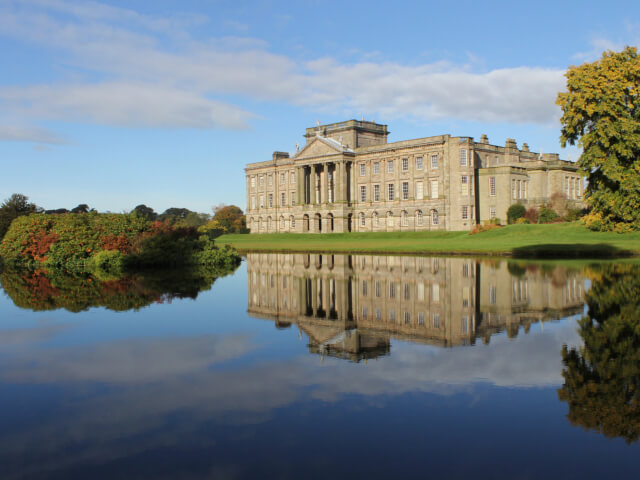 The palatial Regency stately home of Lyme, with its striking interiors and delightful, scenic gardens, was forever immortalised in the famous blush-inducing lake scene of Pride and Prejudice. The 1995 BBC adaption shows Colin Firth’s Mark Darcy emerging from the lake in his soaking white shirt, accompanied by a backdrop of the estate’s greenery and well-kept gardens.

Lyme was also turned into a melancholy haunted manor in 2011, portraying the post-war boarding school in The Awakening, a film starring Rebecca Hall and Dominic West. Doubling up for a selection of genres, Lyme Park offers the best of both worlds in its grand exterior and wondrous National Trust lands.

We also offer a selection of cottages near National Trust attractions, so you can ensure that you’re never far from enchanting points of historic interest and captivating hertiage. 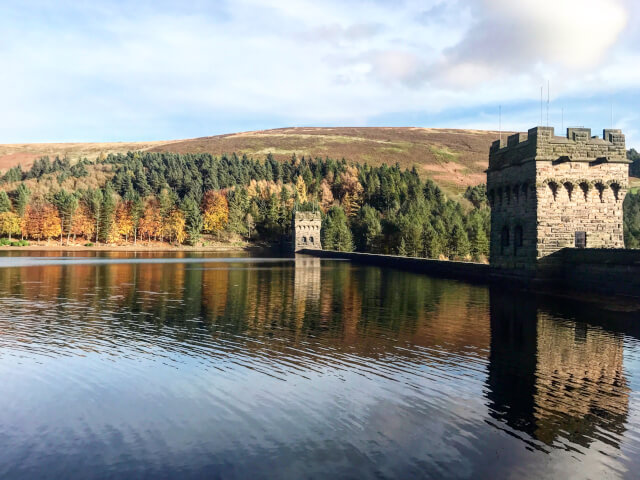 Surely one of the most well-known film scenes of the 1950s, the bouncing bomb scene in the classic wartime film, The Dam Busters, was filmed at the Upper Derwent Valley reservoir, with its recognisable Gothic Revival towers. The reservoir is a popular fishing spot and is also a lovely place for scenic walk, offering an easy route for every explorer to stop and observe the wonder.

One of the biggest inland waters in England, the valley was used as the test area for the real raids, as well as scale models of targets and real Lancasters being flown to give the film its classic war connotations of the Ruhr valley.

We provide an array of fishing holiday cottages if you’re looking for a tranquil trip, or to immerse yourself in gripping history, browse our Grade II historic holiday cottages, offering accommodation like no other. 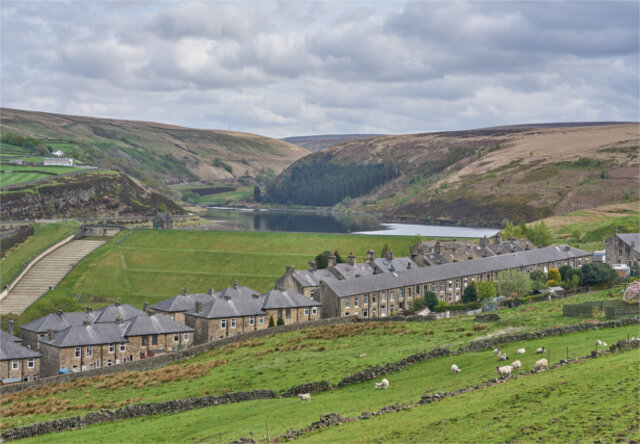 Resting just outside of the Peak District National Park, the village of Marsden (pictured) rose to fame most recently through its appearance in the BBC crime drama, In the Dark. Based on the books by best-selling author, Mark Billingham, the television show adapted the localities of the modern village to suit the eerie aura of the thriller.

The fictional village of ‘Polesford’ is the setting for the mini-series, with Marsden’s real-life Peel Street featured as a predominant filming location, with many of the shops being re-branded (The Riverhead Brewery Tap was renamed The Magpie’s Nest). Swedish-born actress MyAnna Buring takes the lead role as DI Helen Weeks, a no-nonsense, heavily pregnant detective, trying to balance the challenges of work with her equally as demanding personal life.

The village also makes an appearance in the dark fantasy film, A Monster Calls, again using Peel Street as its primary focus. Starring Liam Neeson and Liam MacDougall, the film was heavily praised for its themes, directing, performances and visual effects.

Looking to live your own cinematic adventure? Browse our fantastic range of cottages in the Peak District, or choose a National Park cottage to explore more of the nation’s wonders.

Hi, I’m Brittany. I joined the SEO team as a Web Content Writer in June 2019 after spending some time doing freelance work strai... 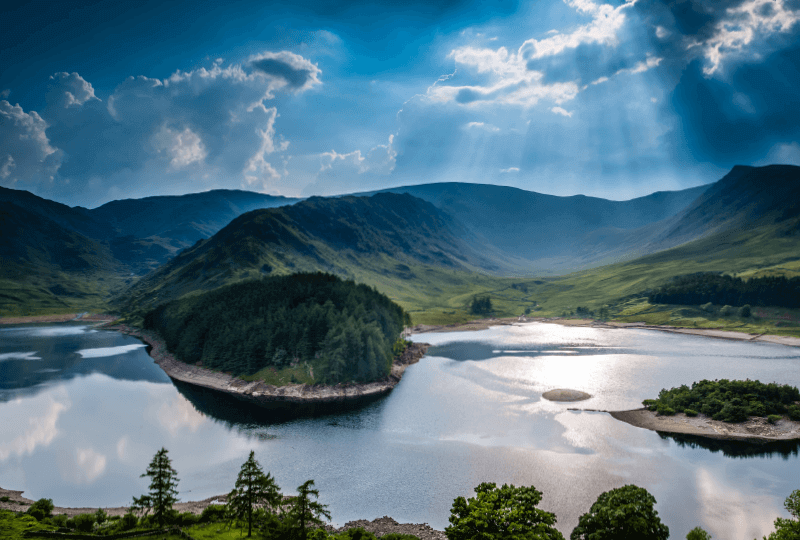 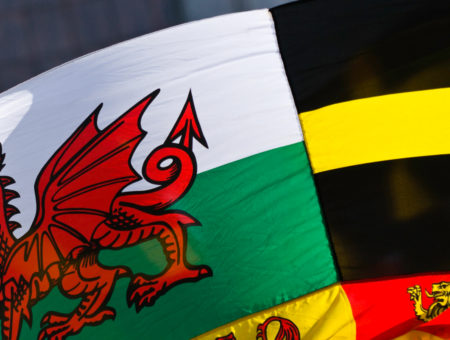