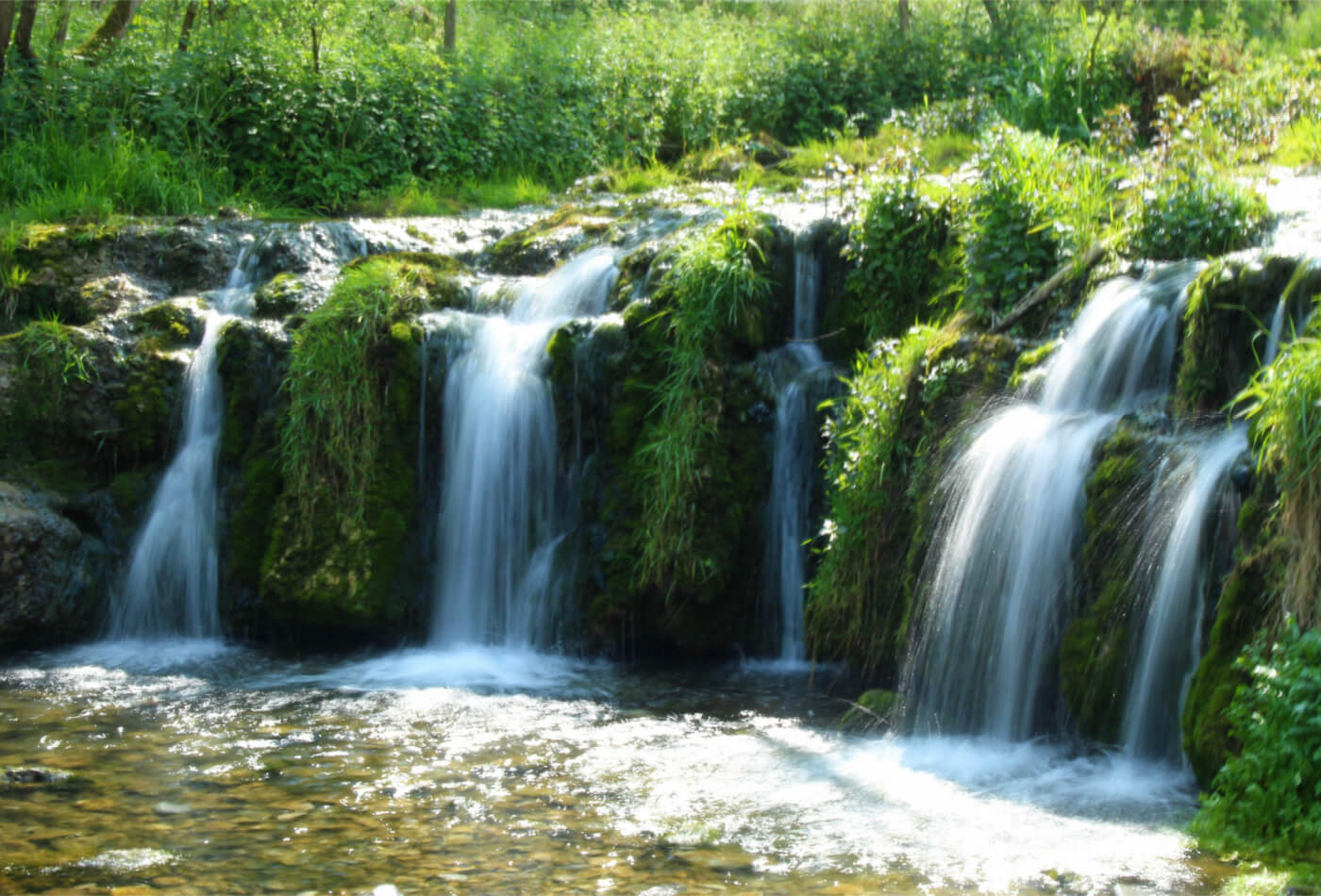 The Peak District boasts some of the most picturesque countryside in the UK, with rugged peaks, open moorland and wooded valleys contributing to its vast and varied landscape.

But we want to talk about waterfalls. These natural attractions of cascading water are easy to come by in the beautiful Peak District. We recommend getting outside and exploring as many as you can, as soon as you can.

From the impressive Kinder Downfall to the pretty waterfall beside Wessenden Head Reservoir, we have selected 11 of our favourite Peak District waterfall walks that you simply must try. 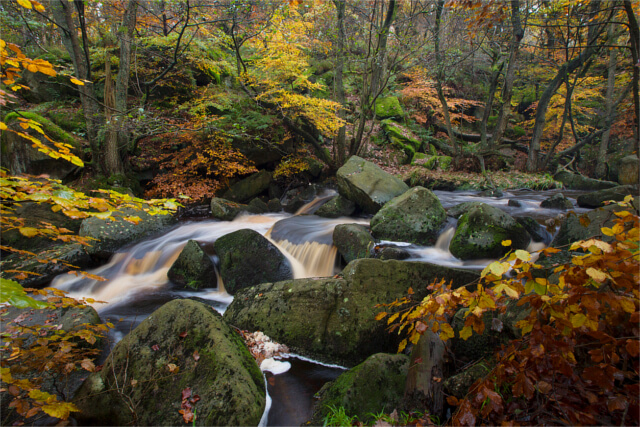 The Padley Gorge Trail is approximately a three-mile-long hike through the Burbage Valley, heading north towards the National Trust’s Longshaw Estate, and this waterfall is one of the rewarding highlights you’ll encounter along the way.

Explore the woodlands and meadows of the magnificent estate and grab a well-deserved lunch and cup of coffee at the café on-site afterwards. 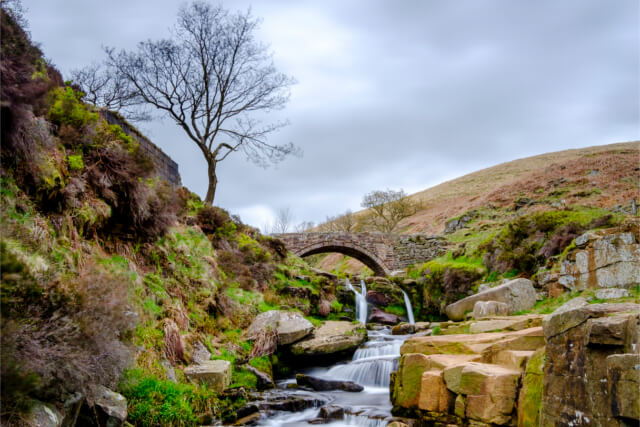 Panniers Pool can be found flowing beneath Panniers Pool Bridge (also known as Three Shires Head), the point on the River Dene where Derbyshire, Cheshire and Staffordshire all meet.

The packhorse arched stone bridge would have been the place that ponies carrying heavy panniers would stop to rest and drink water, hence the name Panniers Pool. 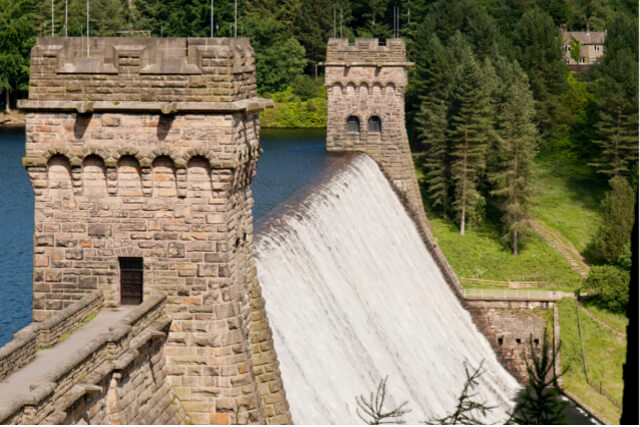 OK, this one may not be a natural waterfall, but it was definitely something we had to include it in our list. In the heart of the Peak District National Park, the Derwent Reservoir is the middle of three Upper Derwent Valley reservoirs, beginning at Howden Reservoir and leading on towards Ladybower Reservoir.

Try the 10-mile route from Ladybower Reservoir to Derwent Edge, passing a host of attractions, rock formations and fascinating reservoirs along the way, and when there’s enough rain and the reservoir overflows, you get the ‘waterfall effect’ at Derwent Dam, pictured above.

You can enjoy the best of the dam views from the scenic Derwent Dam Viewpoint and even stop off for lunch at the nearby visitor centre. 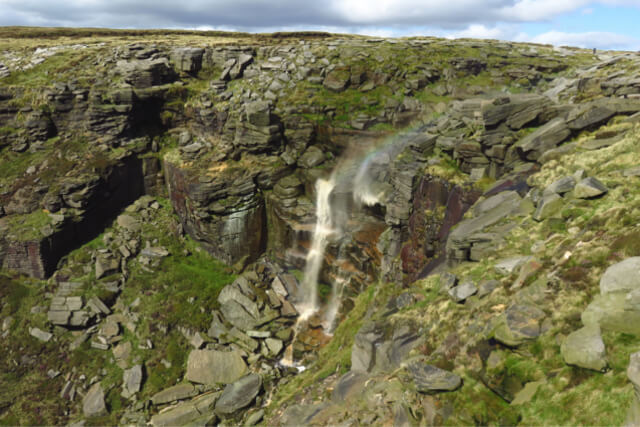 This impressive waterfall cascades water from a height of 30 metres, and is surrounded by magnificent countryside, within close proximity to a number of iconic attractions, including the 2000ft peak of Kinder Scout, while just below is Mermaid’s Pool, thought to be home to two mermaids and believed to offer healing powers to anyone brave enough to bathe in its waters.

Take on the challenging mountain climb, or enjoy a circular walk around the reservoir, and be sure to stop off at this impressive Derbyshire waterfall as you make your way through the impressive national park terrain. To avoid disappointment, visit out of summer, when the river is prone to drying up in the sunshine.

This secret waterfall is slightly off the beaten track, close to the village of Eyam. Accessed just off the main road in the small village of Foolow, opposite a private woodland, is Waterfall Swallet, the second highest waterfall in the Peak District.

Afterwards, make your way back towards Eyam along the banks of Hollow Brook, stopping at the intriguing Mompesson’s Well. 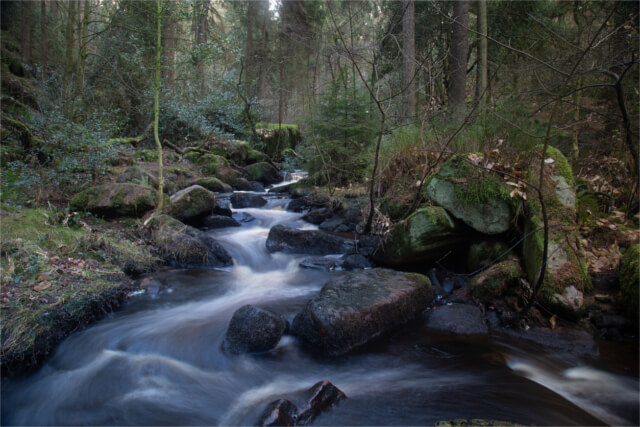 Not too far from the city of Sheffield, you will find the wonderful Rivelin Valley Nature Trail, a three-mile scenic walking route boasting many picturesque waterfalls, stone bridges and gentle streams.

The walk is fun and varied, with stepping stones to hop along as you cross small streams, paddling spots you can enjoy splashing around in, and so many waterfalls and cascades, you’ll eventually lose count!

The trail is pet-friendly and family-friendly, with children’s play areas you can stop off at, so the whole family can enjoy this Peak District waterfall walk. Head to the café for a well-deserved ice cream on a warm summer’s day when you’ve finished your walk.

Just a few miles from the popular Derbyshire town of Bakewell, in the quaint village of Over Haddon, you will find the waterfall at Lathkill Dale, one of the prettiest dales in Derbyshire, along the banks of the River Lathkill.

The river moves from Monyash towards the Wye, flowing from its source at Head Cave, a mysterious and dramatic cave not far from the waterfall that you definitely need to see.

Begin your walk from Over Haddon, which offers free parking for drivers. The walk is fairly straightforward and the waterfall is right by the footpath, so easily accessible.

After you’ve seen the waterfall and cave, head east along the river towards the stunning and historic Haddon Hall, boasting picturesque Elizabethan gardens and resting along the banks of the River Wye. A fascinating Peak District day out for all. 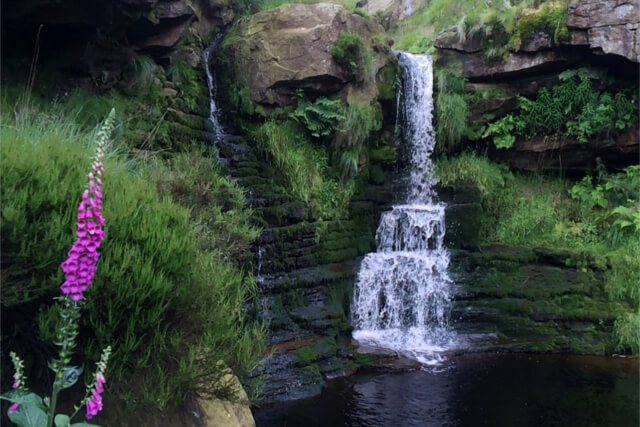 Another of the Peak District’s waterfalls that can be accessed from the Pennine Way, at the northern tip of the national park, is Wessenden Reservoir, part of a network of reservoirs in Wessenden Valley.

The Pennine Way continues north alongside the four reservoirs towards the scenic viewpoint and lake at Butterfly Reservoir, starting at Weesenden Head, the highest of the four reservoirs, passing pretty valleys and waterfalls along the way.

There are several other walking trails you can embark on around Wessenden Head Reservoir, including a waymarked footpath accessed along the Kirklees Way, and a walk from the northern tip of the national park through the village of Marsden, passing the National Trust’s Marsden Moor Estate Nature Reserve.

In close proximity to the High Peak hamlet of Crowden, is Middle Black Clough, the middle of three cloughs in the area and home to a magnificent 10-metre waterfall.

The waterfall can be accessed via a few different walks, just off the main road (A628) by Woodhead Reservoir, so the choice is yours!

You can choose the short-distance, two-mile circular walk, which does require you to cross water, so wellies are essential! Alternatively, have a go at the long-distance Longdendale Trail, which passes a network of reservoirs between Woodhead and Tintwistle, on the fringes of the national park, before stopping off at the picturesque waterfall. 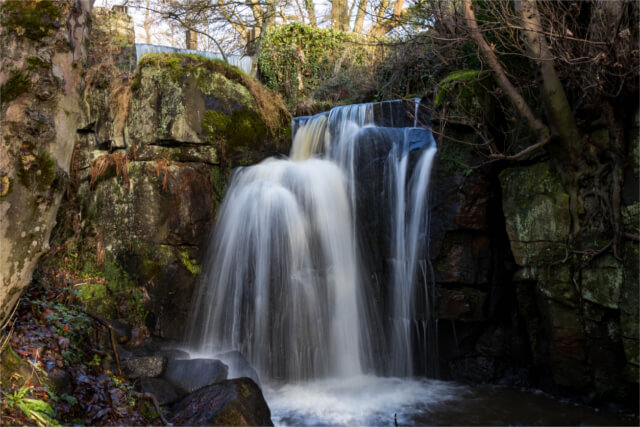 Close to the Derbyshire town of Matlock, on the fringes of the Peak District National Park, is Lumsdale Falls. Resting within the Lumsdale Valley, this Peak District hidden gem offers a wonderful Peak District waterfall walk.

The short walk around the valley and towards the waterfall encompasses a multitude of history in the form of old water mills, as well as a viewing platform beside the waterfall, where you can admire the cascading water close up.

Not far from here is the renowned Heights of Abraham, where you can soak up the picturesque scenery from above on a cable car journey towards a picturesque hilltop park, filled with other scenic walking trails. 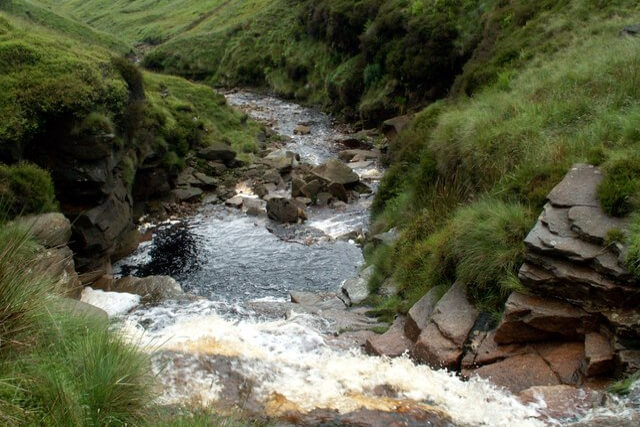 Set in the centre of the national park, in the Dark Peak region between the magnificent peaks of Kinder Scout and Mam Tor, is Crowden Brook and its waterfall.

The brook and waterfall can be accessed via several scenic trails from Edale, encompassing Kinder Scout, Grindsbrook and Jacob’s Ladder, the latter of which is the most popular hike, boasting rolling countryside and quaint village views.

Some of these walks are fairly challenging and will require some scrambling, but a gentler and quieter route goes around Crowden Clough, if you stick to the footpath.

Discover more fantastic things to do with our Peak District Travel Guide and find your ideal holiday cottage amongst this selection of Peak District cottages. 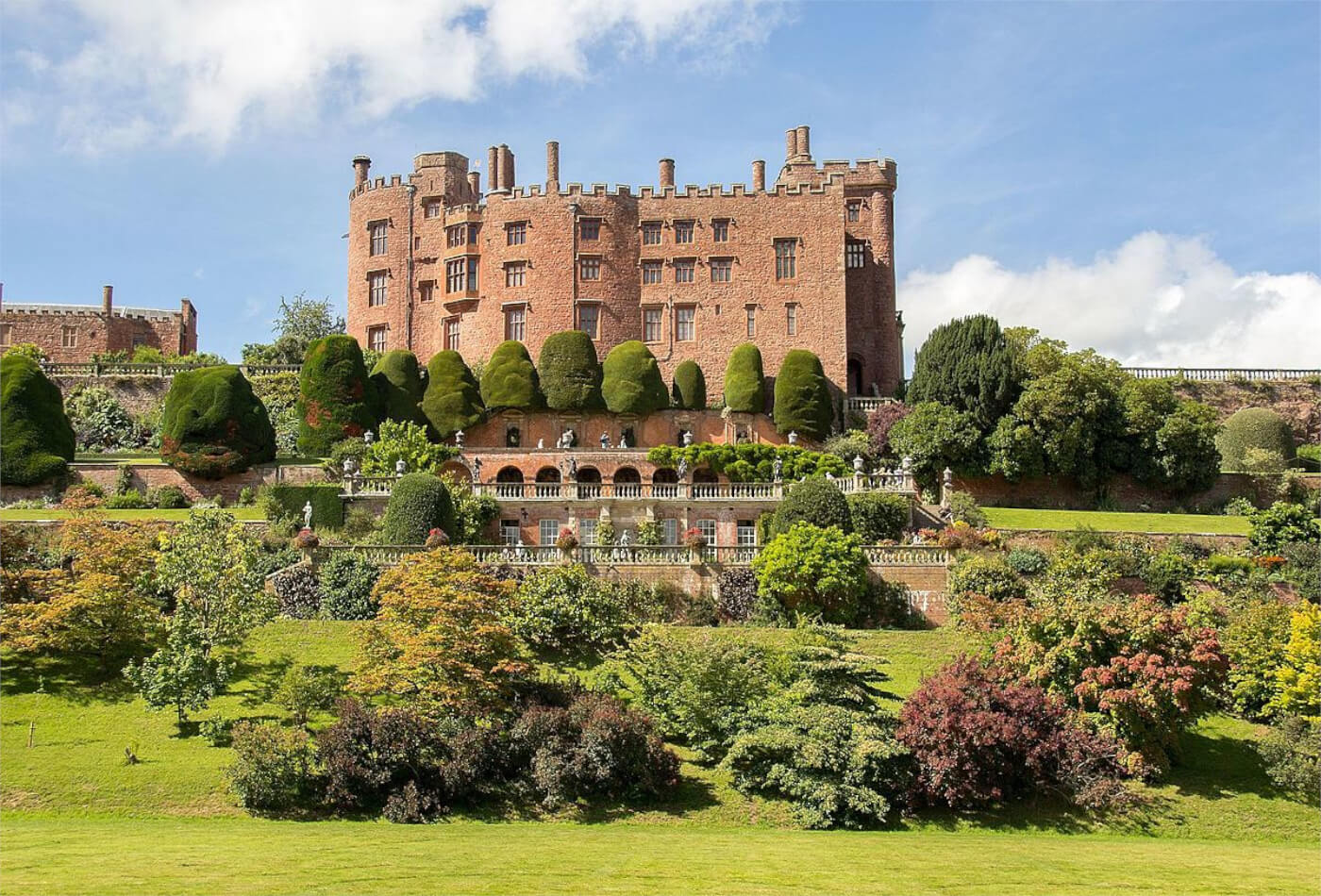 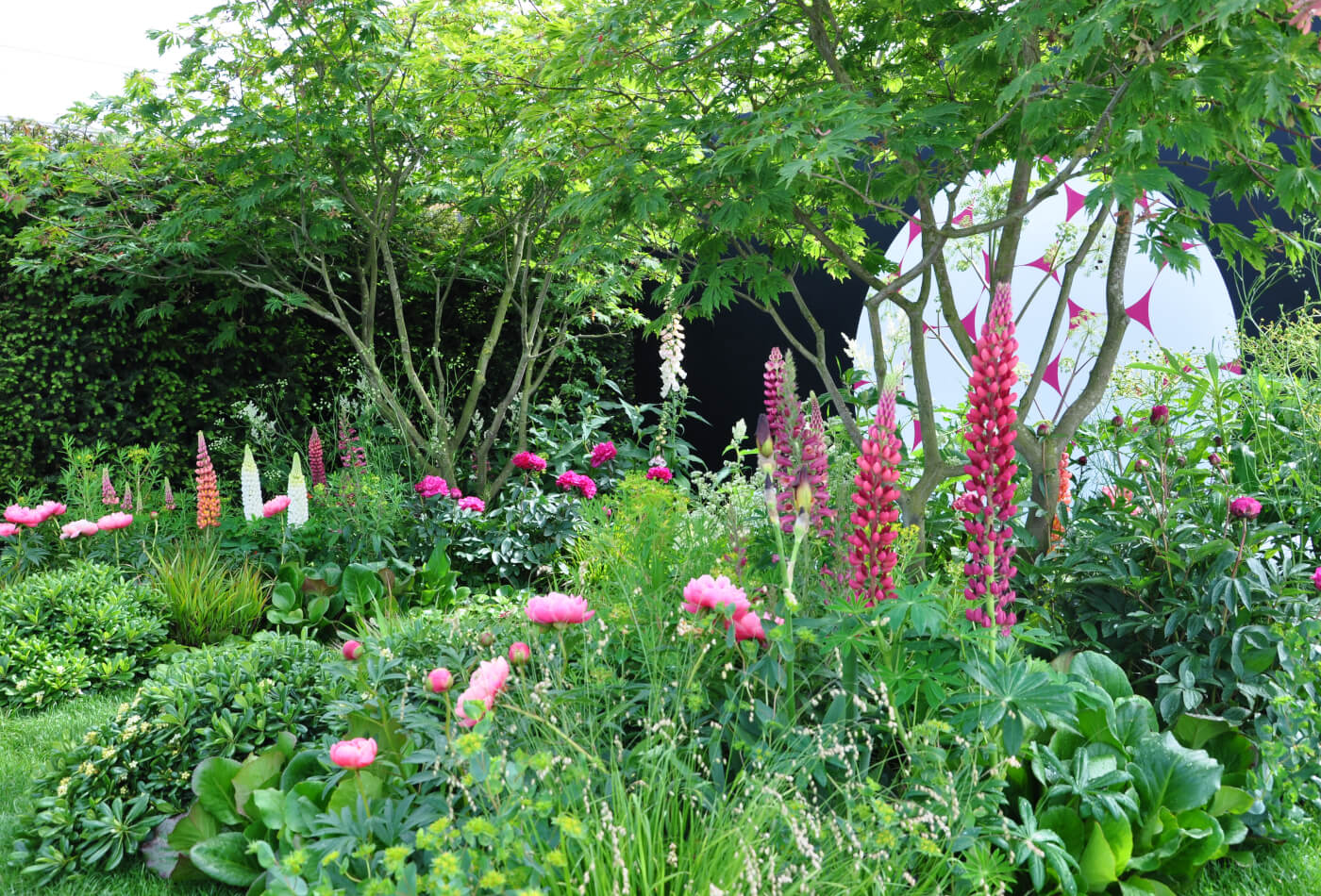