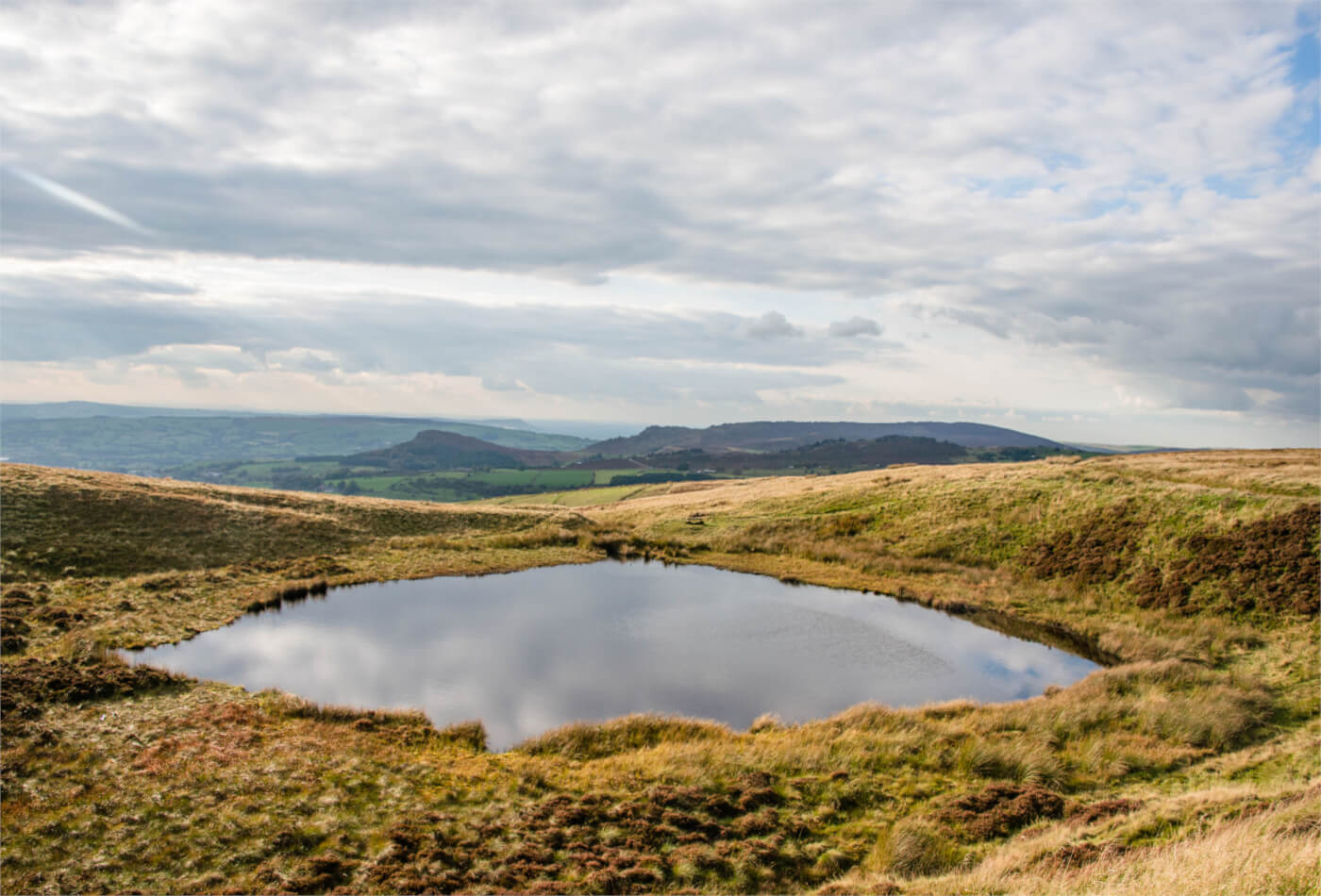 Whether you’re training for a triathlon or simply looking to clear your mind with a peaceful swim surrounded by nature, wild swimming is an increasingly popular pastime for many people.

The Peak District is a wonderful part of the UK to engage in wild swimming, with a great selection of pools, ponds, and rivers that the public is welcome to swim in.

If this sounds like an activity you’d love to try, choose from these 7 wild swimming spots in the Peak District… 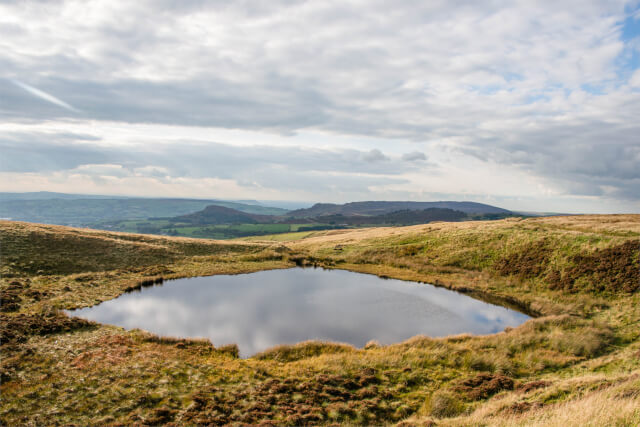 Our first suggestion for places to swim in the Peak District is Blake Mere Pool (also known as Black Mere Pool or Mermaid’s Pond). This stunning pool is surrounded by rugged moorland, just north of the Staffordshire town of Leek, beside the road that runs between Leek and Buxton.

Blake Mere is steeped in folklore and mystery; it is one of two sites in the Peak District that is thought to be home to a mermaid and is allegedly the site of several mysterious drownings and even a murder over the last few centuries.

The deep and dark water is said to be bottomless and the story goes that the mermaid leaves the water at midnight to lure male travellers to their deaths. Some believe she was a witch from the Middle Ages, while others say a sailor fell in love with her and brought her back from the sea.

Don’t let the legend deter you; this spot is a spectacular place for wild swimming for those looking for a remote location surrounded by a picturesque landscape. It’s the perfect spot for a dip after an enthralling hike to The Roaches. 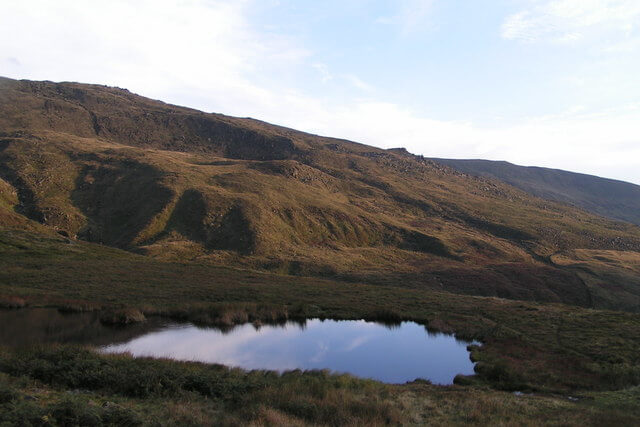 This unusual saltwater ‘pool’ is thought to have healing powers, and those who were brave of heart and on a quest for eternal life would take a dip in the icy water at midnight on Easter Sunday, when the mermaid was thought to appear and decide whether to grant your mortality wishes or drag you to the depths!

Choose a pleasant weather day to visit this wild swimming spot, as the surrounding dramatic moorland can become quite treacherous in adverse conditions. Nevertheless, it’s definitely worth treating yourself to a refreshing swim after completing the demanding Kinder Scout Walk. 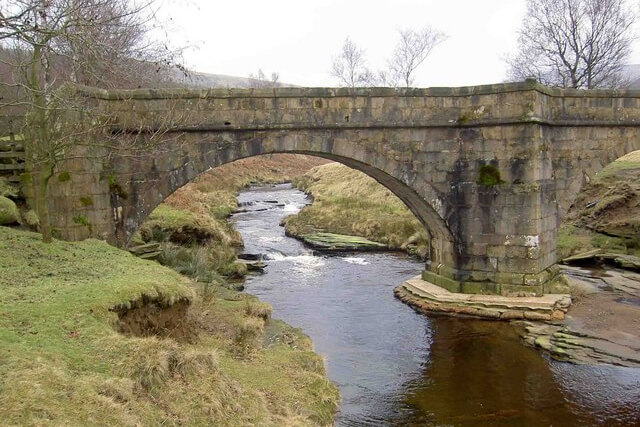 Located at the northeastern end of the Peak District National Park, just north of Howden Reservoir in the Upper Derwent Valley, is Slippery Stones.

Situated within a network of hiking, cycling and walking trails, varying in difficulty and length, an open water swim here is the perfect way to cool off after a day wandering the likes of Bamford Edge, Snake Woodland and the Longendale Trail, all of which run close by.

The area that is deep enough for swimming is quite small and may become crowded during the summer months, but the remarkable surrounding views are well worth it. Add this Sheffield wild swimming spot to your must-do list on your next visit! 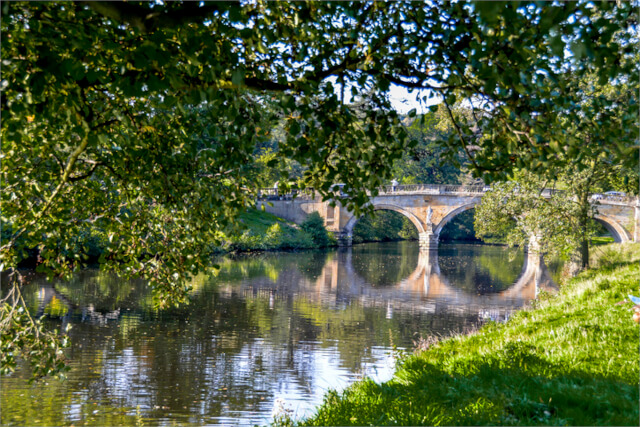 A particularly attractive open water swimming spot in the Peak District is on the River Derwent, close to the remarkable Chatsworth Estate, which proudly rests on the riverbank.

The sandy riverbed offers comfortable access into the river and you have plenty of space to swim freely whilst soaking up your surroundings.

Be sure to pay a visit to Chatsworth; home to the Duke and Duchess of Devonshire, this remarkable manor has been home to the Cavendish family for nearly 500 years. The interior boasts rooms filled with impressive architecture, collections of art and ancient artefacts.

End the day on a high by picking up some delicious treats at the Chatsworth Estate Farm Shop, just over a mile away in the nearby village of Pilsley. 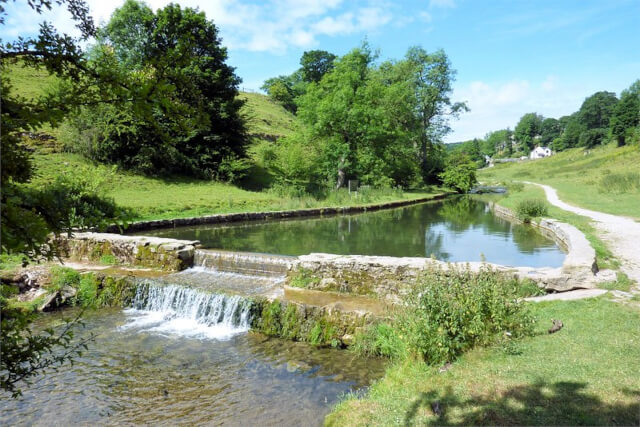 This family-friendly Peak District wild swimming spot can be found on the River Bradford, just 10 minutes’ drive from the lovely village of Bakewell.

A designated swimming area has been carved out of rock and clean, fresh water runs through freely, making it a popular spot for children to paddle and for families to enjoy an afternoon dip. The water can get pretty chilly, so for those feeling less brave, why not pack a lilo and bob along the water peacefully instead?

There is plenty of grassland surrounding the river, perfect for a picnic once you’ve dried off and warmed up. After which, you can embark on a circular walk that that takes you right around the river. A perfect Peak District day out for all! 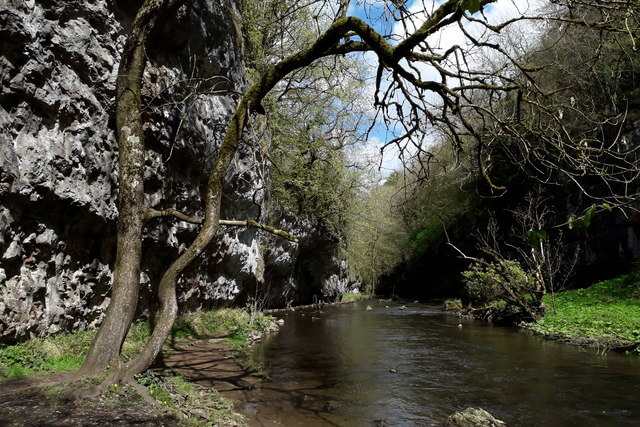 This Peak District gem offers a dramatic backdrop to your Peak District wild swim, in the form of a steep-sided gorge, which stands imposingly alongside the River Wye, just a short distance from Buxton.

Chee Dale offers also offers a selection of walking trails to embark upon; meander along the curves of the Wye, negotiating the stepping-stones crossing, before reaching the protected nature reserve, managed by the Derbyshire Wildlife Trust, complete with a quarry.

Access the Monsal Trail, which runs along a former railway line and takes in striking limestone dales, a plethora of colourful flora, an incredible viaduct and several tunnel systems, making for an unforgettable day out in the Peak District. 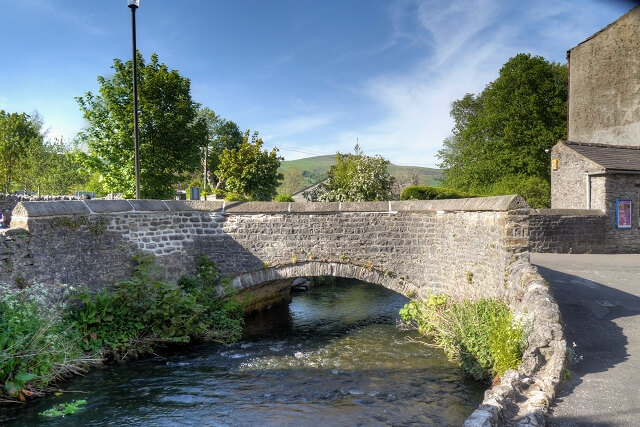 The stream of Peakshole Water is the final wild swimming spot on our list, flowing from its source at Peak Cavern, through Castleton village and into the village of Hope towards the River Noe.

Castleton provides a fantastic day out opportunity, with a network of intricate underground caves to be discovered, filled with fascinating rock formations, including Peak, Speedwell and Treak Cliff caverns, as well as fantastic walking trails through the limestone valleys and rolling countryside of Hope Valley. The Cave Dale walk is particularly scenic, encompassing striking rocky terrain and lush countryside, as well as the fascinating landmarks of Mam Tor and Great Ridge.

Cool off after an active day exploring above or below ground, enjoying a picnic on the grass that surrounds, before rounding off the afternoon with an open water swim.

Fancy taking the plunge? Share your favourite wild swimming spots with us on Facebook, Twitter and Instagram. Find your ideal Peak District holiday cottage and discover more fascinating things to do during your stay with our Peak District Travel Guide. 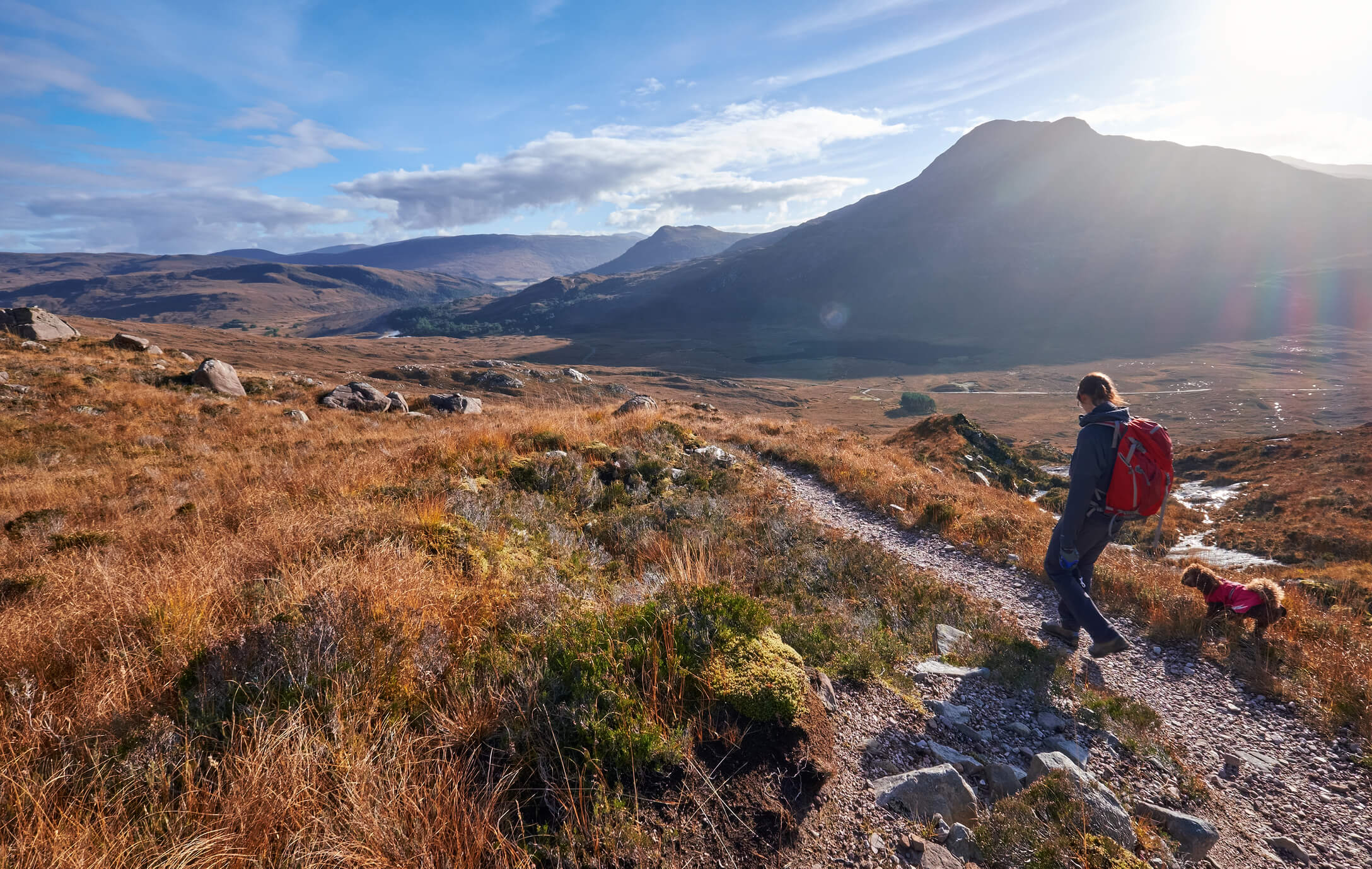 Top 10 Destinations in the UK for a Walking Holiday

For this post, we’ve collaborated with The Tourist Trail – a tourism platform helping you explore the UK through... 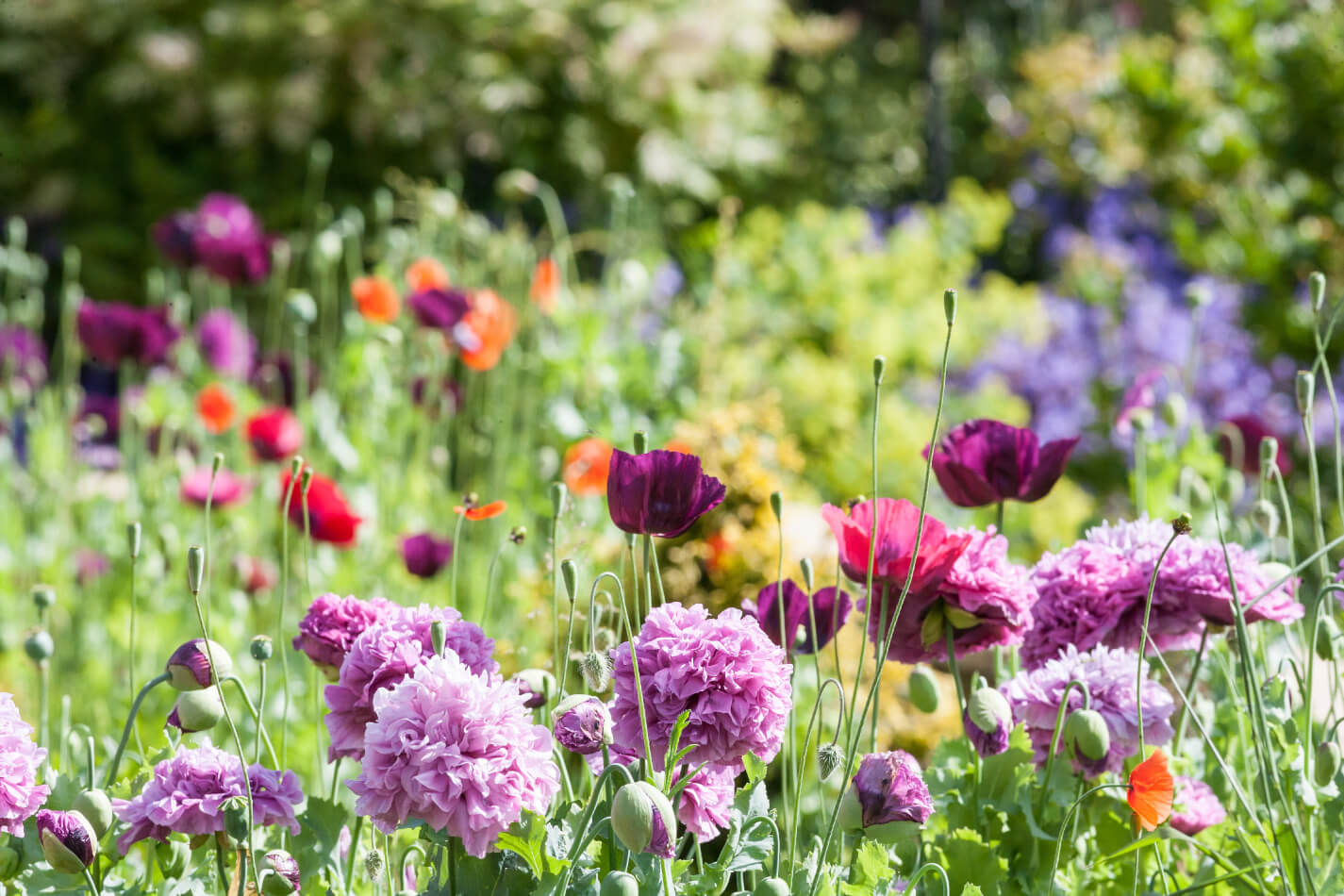 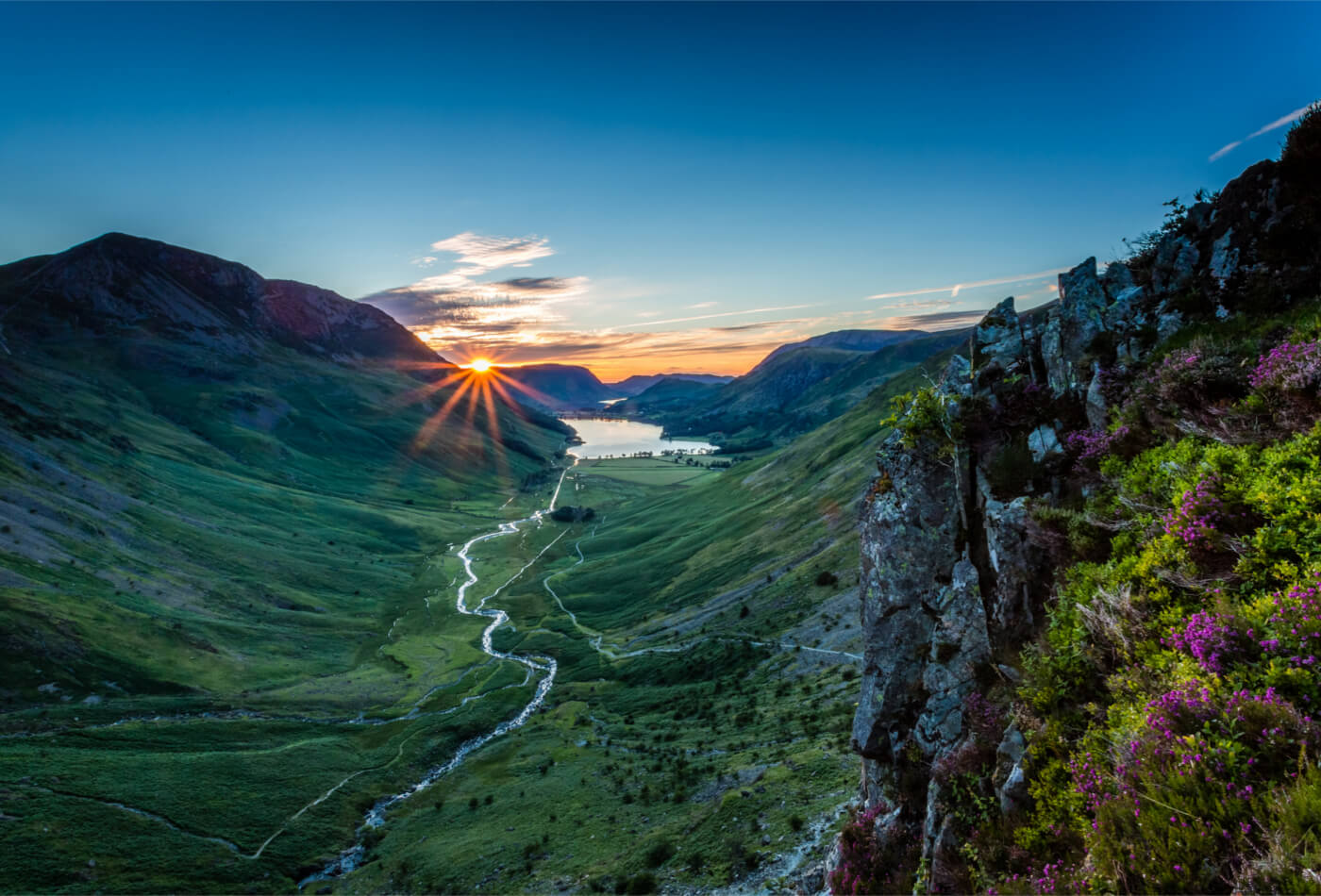