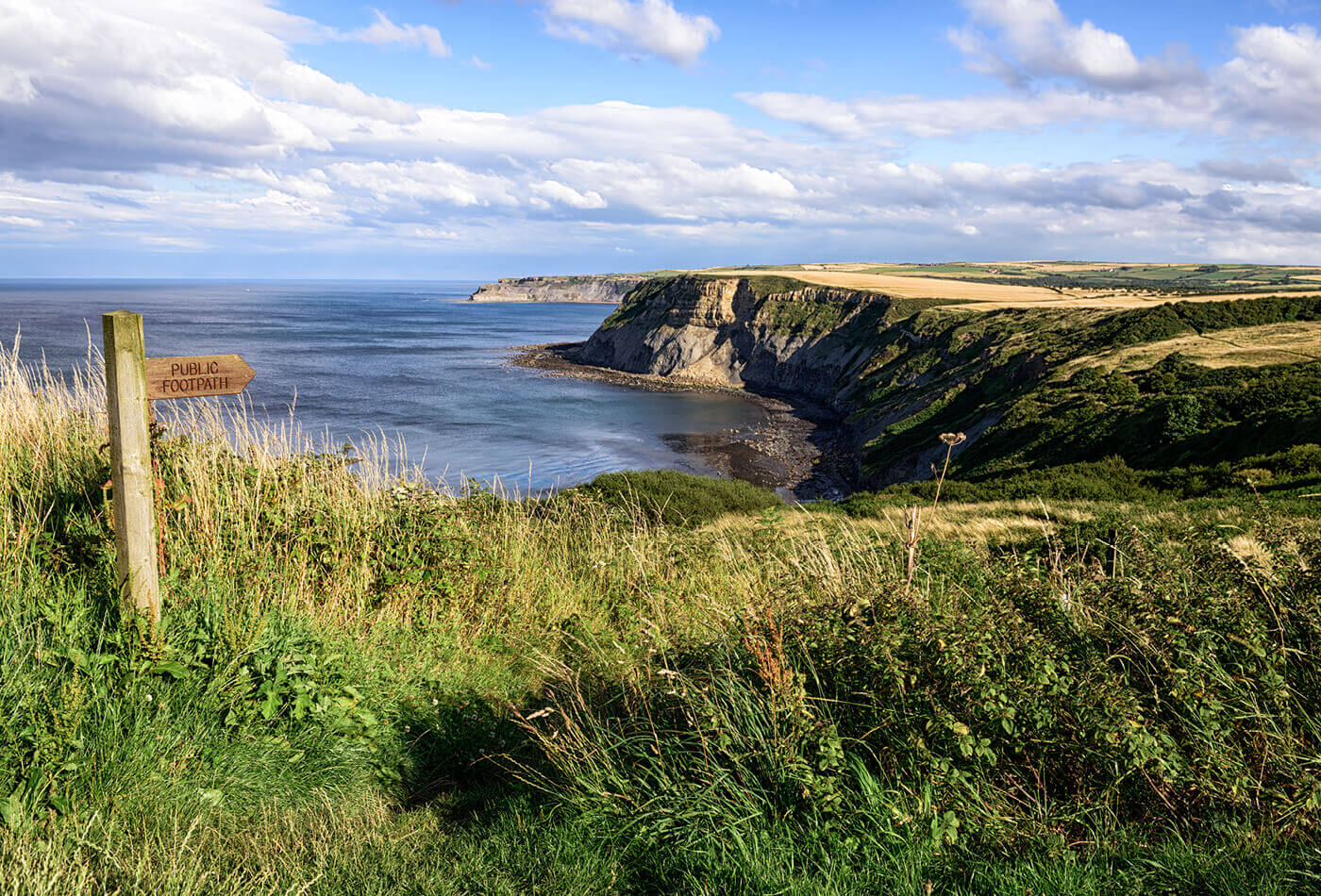 8 Hidden Gems to Discover in Yorkshire

Chosen especially for you this month are 8 of Yorkshire’s hidden gems, unveiling a sense of awe and curiosity.

With its stunning National Parks and a population as big as Scotland’s, Yorkshire has long been attracting droves of tourists each year, seeking if only but a glimpse of what it has to offer.

From Dales to Moors, seascapes to cityscapes, Yorkshire is full of incredible hidden gems that are positively crying out to be explored.

Boasting a flag of its own, a unique dialect and a whole day dedicated to celebrating its vibrant culture and compelling history, this beautiful English county is one not to be missed. 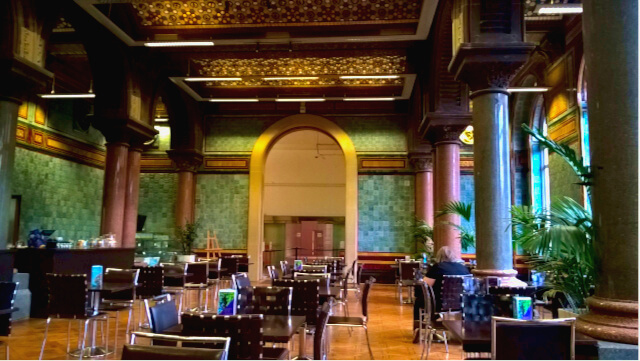 Sweeping arches, intricate stained glass, marble floors, it’s almost a cathedral to the age of progress. But, without a doubt, its most stunning architectural feature has to be the breathtakingly beautiful Tiled Hall. This jewel of Victorian design is decorated with ornate and colourful Victorian tiles and it’s most dazzling section is the vaulted ceiling with its bursts of speckled colour.

Lost for decades beneath brutal 1970s interior design, it was eventually unearthed, restored and transformed into the Gallery’s café in 2007. Now, visitors can tuck into something delicious and marvel at the beauty all around them – a work of art in its own right. 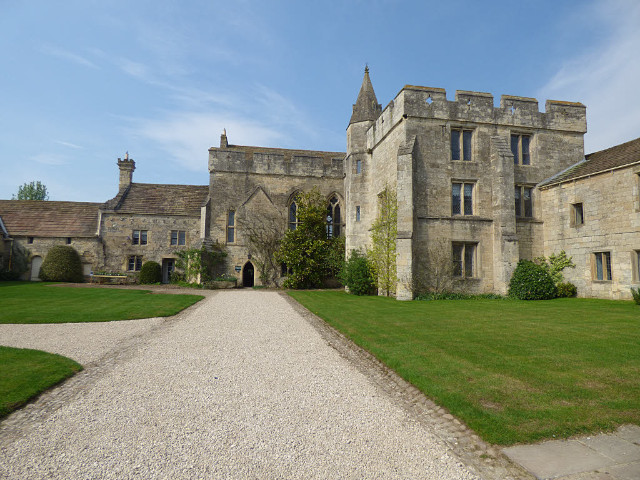 In the rural countryside, some three miles south of Ripon, this tranquil and beautiful 14th-century hall has barely altered since it was first built and has a claim on being the oldest continually inhabited house in the country.

Surrounded by ancient walls and a moat complete with resident black swans, it’s easy to find yourself transported back in time as you wander the historic halls, enjoy a delicious, locally-made afternoon tea and listen to colourful stories from the property’s fascinating history. What is most apparent as you explore Markenfield Hall is the almost palpable sense of total tranquillity in every corner.

Like in all the best fairy tales, however, the magical entrance to another world isn’t around for long and Markenfield Hall is no different. The gates of this unique place are only opened to the public for 30 precious days annually, so make sure you’re amongst the few each year to catch a glimpse of it! 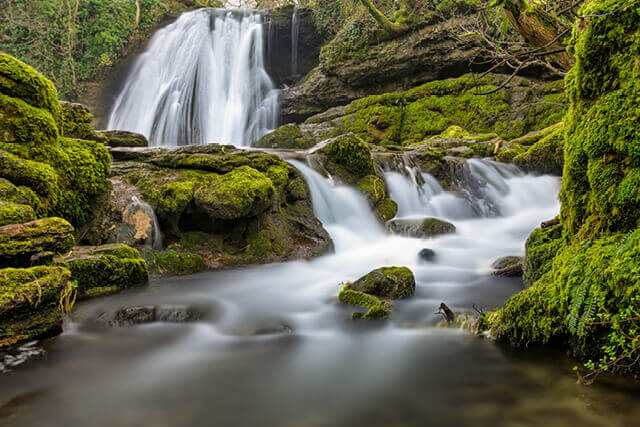 This gorgeously scenic waterfall and pool in peaceful woodlands near the village of Malham is the perfect spot for a stroll and a picnic. Just to the right of the glittering waters is a small cave said to be the home of Janet, the queen of the fairies, who gives her name to this enchanted place.

On the footpath from the village, keep an eye out for the tree stumps covered in lucky pennies left by passersby. Don’t forget to leave your own behind and make a wish to Janet and her fairy subjects.

A little North of the waterfall is Gordale Scar, a towering gorge created over 15,000 years ago during the Ice Age. The impressive rock formation is amazing to behold and has inspired many fictional phenomena: as well as being a film location for Harry Potter and the Deathly Hallows Part 1, it is also said to have been the inspiration behind the description of Helm’s Deep in J.R.R. Tolkien’s The Lord of the Rings trilogy.

4. The Snickelways of York, North Yorkshire 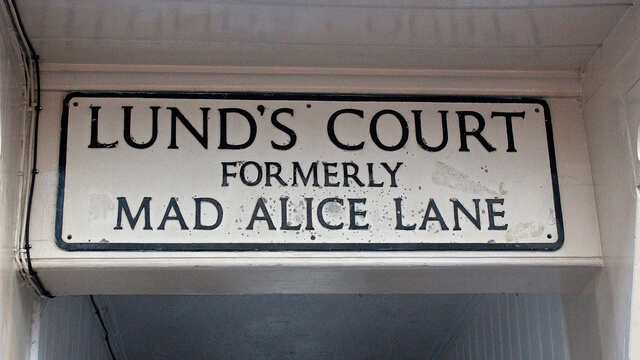 The Shambles, with its overhanging medieval timber shops, is unquestionably York’s most famous thoroughfare. However, the city is full of narrow, medieval alleys or Snickelways which are hidden in plain sight and each of which have their own fascinating tales to tell.

The name was coined by merging the words ‘snicket’ and ‘ginnel’ (both terms for a passage between buildings, in areas of Northern England) along with ‘alleyway’.

Here are some of our favourites:

Lund’s Court (Formerly Mad Alice Lane) – Local legend tells that the former name of this Snickelway took its name from a woman who lived here in the early 19th century. It’s said that Alice became insane and murdered her husband, for which crime she was hanged at York Castle. To this day, her ghost has reportedly been seen lingering in the passage. Visitors, beware!

Coffee Yard – York’s longest Snickelway, this passage is the site of Barley Hall, an ancient house with its very own unseen history. Hidden behind the facade of an ugly, modern office block, it was only rediscovered during demolition work in 1984, after which it was lovingly restored to its former glory so that visitors can experience how its 15th-century residents lived.

Whip-Ma-Whop-Ma-Gate – Although it’s not technically a Snickelway, we can’t leave out the city’s shortest street with the longest name! No one can quite say for sure what the origin of this tiny stretch of pavement’s name is. Some believe it comes from the whipping post that once stood nearby, while others think it’s derived from an Anglo-Saxon term meaning “neither one nor the other.” Whatever the case, it’s a wonderfully unusual name you certainly won’t forget in a hurry. 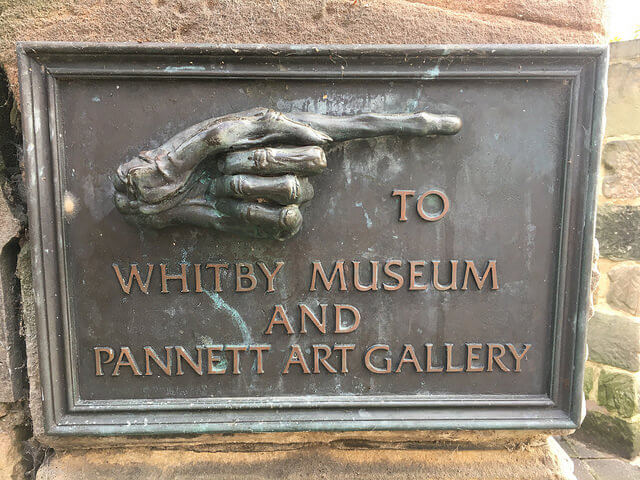 The quaint, winding streets of Whitby, nestled between the cliffs either side of the River Esk and overlooked by the imposing ruins of Whitby Abbey, are overflowing with historic character.

It is perhaps most famous for being the place in which 19th-century author Bram Stoker was inspired to write his iconic vampire novel, Dracula. What’s more, the novel’s supernatural villain actually lands in Whitby on a ship before bounding up the town’s well-known 199 Steps in the form of a spectral dog towards the clifftop churchyard of St Mary’s, where he later goes on to attack one of the central characters in a horribly frightening scene.

With all these literary links, it’s little wonder that the town is a popular place of pilgrimage for Stoker fans. Those looking to sink their fangs into a touch of the 19th century’s marvellously macabre ambience away from the tourists’ beaten track should look no further than Whitby Museum. Its Victorian collection of objects is positively brimming with all manner of weird and wonderful oddities.

Amongst the fantastic array of local fossil finds and maritime paraphernalia, it also features: a grisly embalmed hand, known historically as a ‘Hand of Glory’, supposedly used for black magic; a Curiosity Cabinet brimming with bizarre artefacts gathered together from around the world; and the grandly named Tempest Prognosticator, a whacky invention that used live leeches to predict stormy weather. 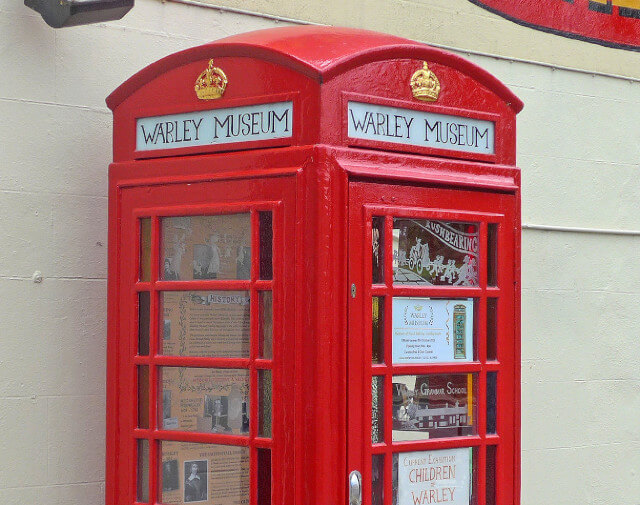 This hidden gem in Warley Town, a historic village near Halifax, is not what it appears to be at first glance… What may look like a humble red telephone box is, in fact, a museum – possibly the smallest museum in the world.

In the spring of 2016, the Warley Community Association adopted this disused phone box and, after a vote, transformed it into a unique museum dedicated to the village and its history.

Every few months, residents donate artefacts from Warley’s past so that locals and visitors alike, can drop in and engage with the village’s fascinating past in an intimate, personalised space.

We absolutely love the ethos behind this small but mighty museum! 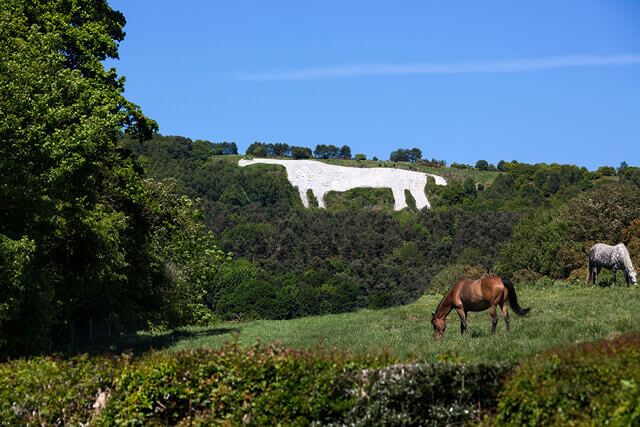 There have been many ancient carvings of horse-shaped geoglyphs over the years, since the first appeared on a hill over three millennia ago.

This majestic shape has now become the country’s most notable choice of engraving on the hillside, revealing layers of silky white chalk against verdant countryside. Interestingly, during World War II, these carvings often had to be camouflaged, so they wouldn’t aid the German Air Force navigating their way around Britain.

The Kilburn White Horse may seem like any other, sitting proudly on the eastern fringes of the Yorkshire Dales National Park, near the village of the same name. Yet, at 318 feet long and 220 feet tall, it hides a secret!

In 1857, a local schoolteacher, John Hodgson and his students constructed this gigantic white figure. However, unlike other geoglyphs, this mysterious equine was sculpted out of a limestone hill instead of the traditional chalk and for this reason; some hill figure purists claim it is a fake.

To give this structure its gleaming ivory finish, chalk chips were carted in and placed over the limestone. In the past, new chips have been added, however it was feared if any more were brought in, the sheer weight of them would lead to a helpless horse melting down the hillside.

To prevent this tragedy, today it is simply sprayed with a coating of masonry white paint. However, this “Old Gray Mare” still holds its nickname, true to its original colouring. 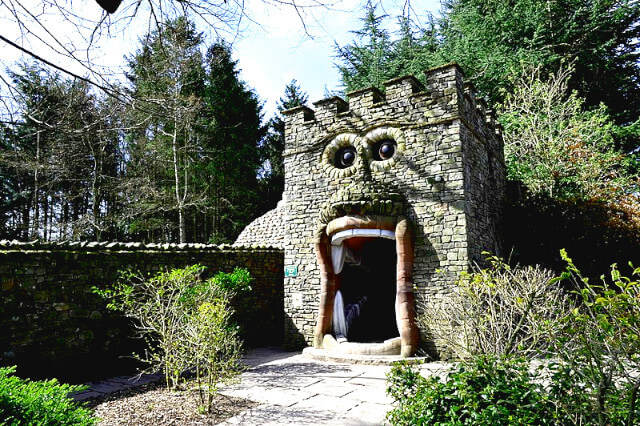 This unusual labyrinth of twisting tunnels, hidden chambers and Victorian-style follies, is a place like no other. Escape to this forbidden corner, and uncover a surreal fantasy; with no map to follow, these gardens will take you on a magnificent, worldly adventure!

Stumble upon the eye of the needle; find concealed statues and even come across a large pyramid made of translucent glass.

These gardens were originally built as a private folly, yet due to high demand were opened to the public in 1994, after a coach full of Hull University students had made the first visit a year previous and fell in love with its absurd uniqueness.

There are is a plethora of trickery to dodge and many decisions to be made each way you turn. Explore the flourishing herb garden and even stop off for a tasty treat in the Corner Café. Discover a whole new day out with a difference.

For more inspiration on things to do in this wondrous part of England, head to our Yorkshire Travel Guide. Even find your own hidden gem to stay in during your visit, with our selection of handpicked Yorkshire Cottages. 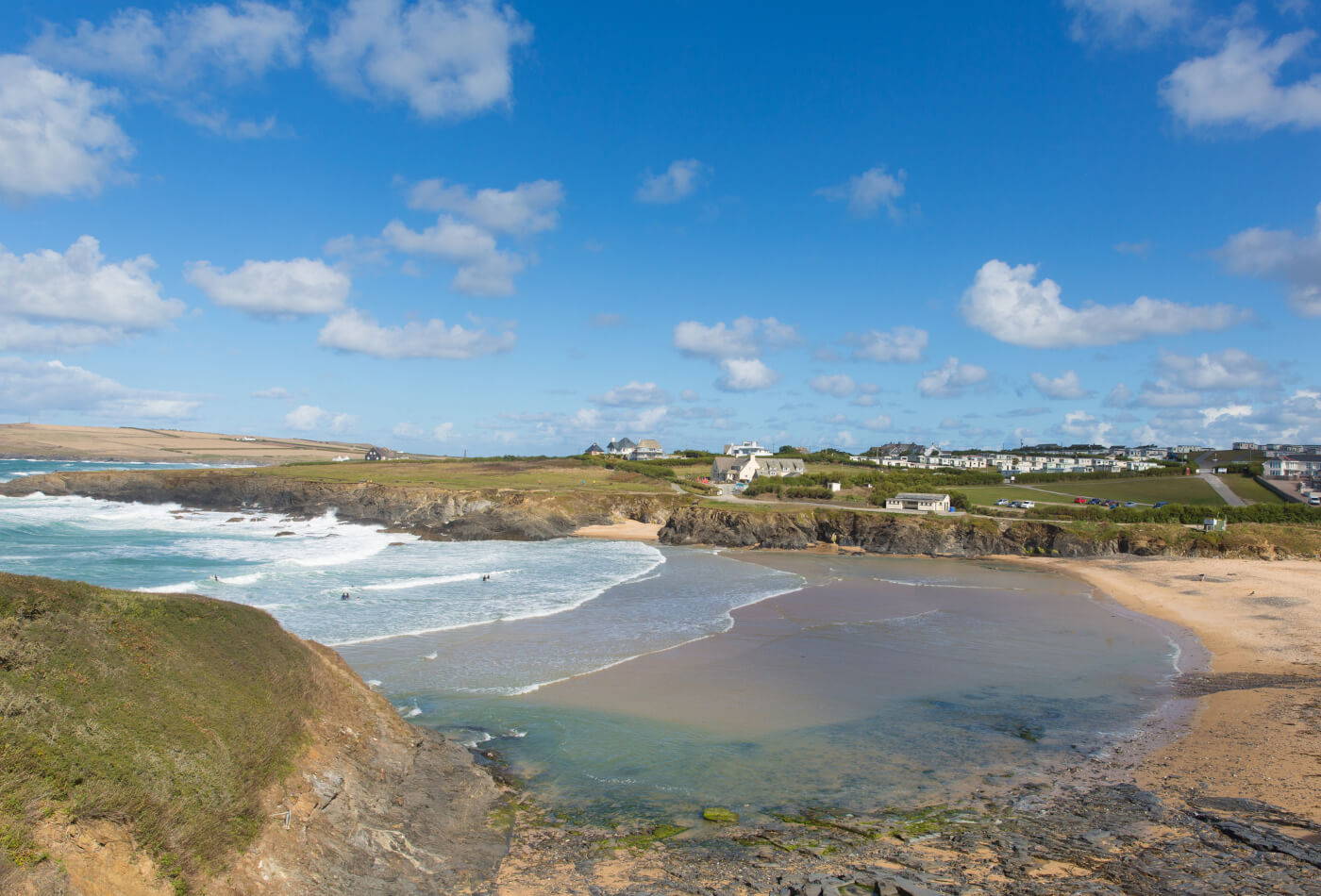 The 12 Best Cornwall Beaches that you must visit

Cornwall beaches are renowned for their crystal blue waters, epic surfing conditions and secret coves that were once smugglers’... 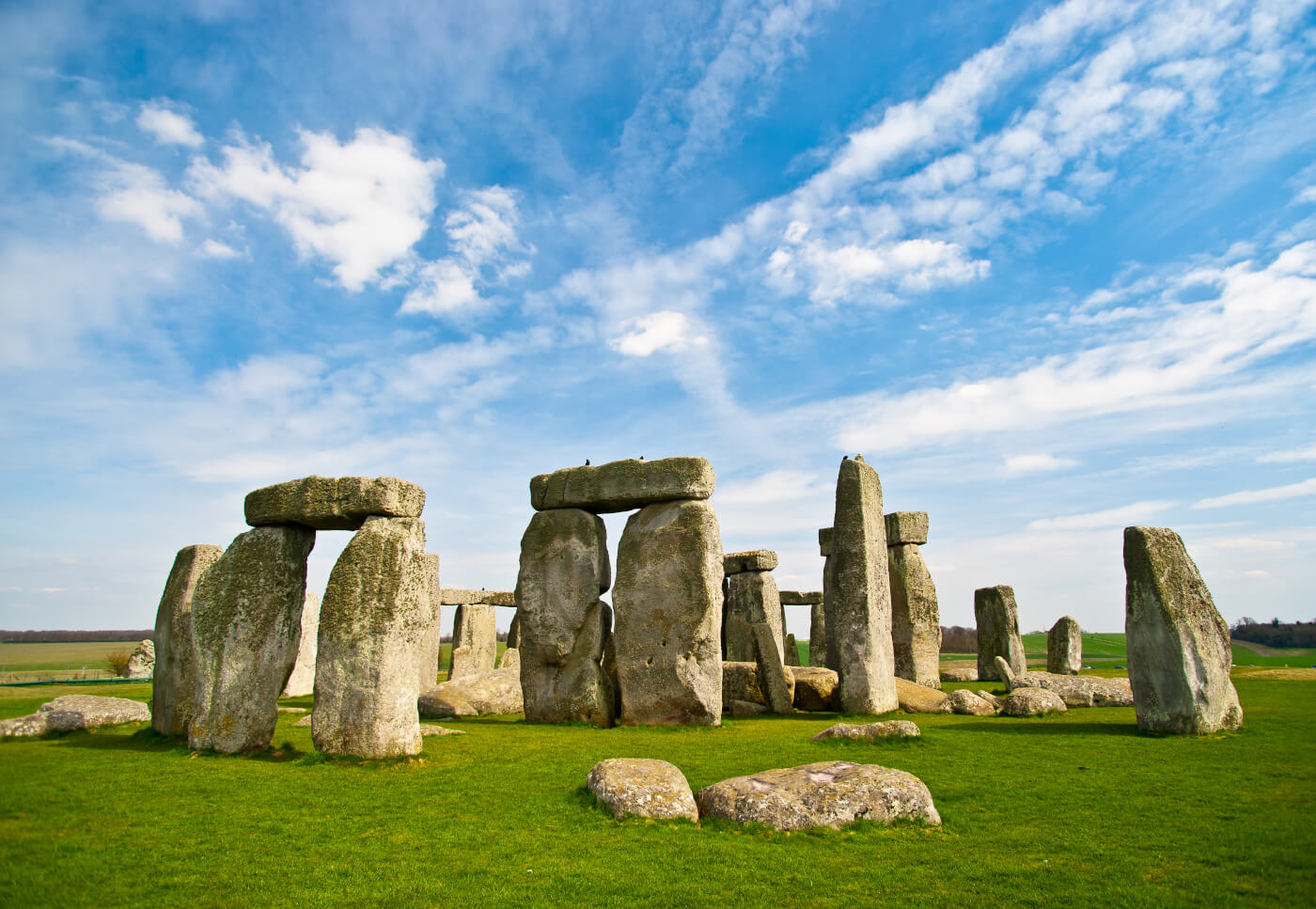 Littered with ancient castles, regal palaces, unique wildlife and captivating countryside, the UK has an endless amount of superb...

The UK is full of hidden gems waiting to be discovered. From the mystical Fairy Pools of Scotland to...